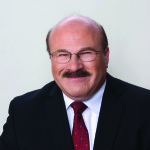 New York State Bar Association President Seymour James has appointed Scott M. Karson, a partner at Lamb & Barnosky of Melville, NY, to the State Bar’s Committee to Review Judicial Nominations.  This Committee reviews the qualifications of nominees for the New York Court of Appeals, the State’s highest Court.  The Committee will next convene in December 2012, when it meets to review the nominees for the seat being vacated by Judge Carmen Beauchamp Ciparick, who faces mandatory retirement at the end of the year.