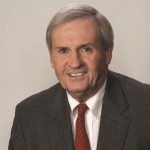 Hon. Michael F. Mullen (Ret.) spoke to those attending the Irish Arts Festival in Queens on August 23, 2012, about the Life and Times of Sean McBride, who won both the Nobel and Lenin Peace Prizes in the 1970s and was the author of the renowned McBride Principles.